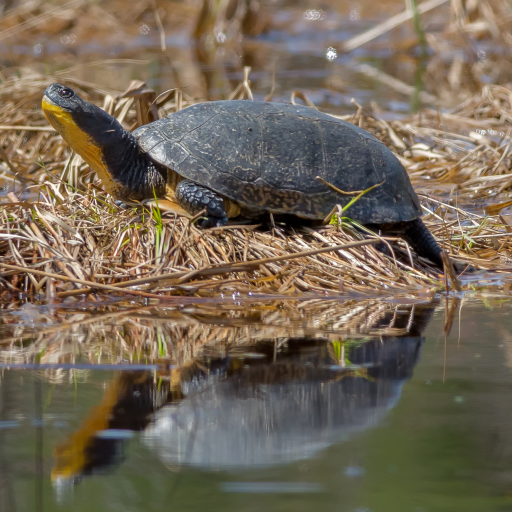 Town of Bracebridge and District of Muskoka want to destroy important turtle habitat.

(Bracebridge, Ontario) A group of committed citizens, businesses and volunteer organizations has come together to protect local turtles and their nesting sites along the South Muskoka River. The turtles’ habitat is threatened by a plan to pave over 1,000 feet along the riverbank and road shoulders in Fraserburg – removing all shoreline vegetation and replacing it with concrete matting.

Bob Dyment, a Muskoka cottager since 1958, has been identifying turtle nesting sites in this area for more than a decade. This year alone, he has identified dozens of turtle nesting sites that would be destroyed by the proposed construction, resulting in critical damage to the long-term health of the species.

“Turtles revisit the same nesting site annually, and when that nesting site is gone, they end up on the roadways still looking for it. Need l say more?” commented Mr. Dyment.

Mr. Dyment has collected critical data on turtle nests which forced the District of Muskoka to seek special permission from the Provincial Environment Ministry to go ahead and kill the turtles and their habitat.

The group has engaged Small Change Fund to provide campaign and organizing support and have created a crowdfunding page to collect tax-deductible donations to fight for the turtles. The Fund’s President Burkhard Mausberg says “Building this road fortification is like the Rogers blackout: neither is wanted, and both cause major disruptions.”

The citizens are calling for an immediate moratorium on paving the riverbank. They cite concerns that excavation will kill the plant and animal species currently living in the area, including many turtle species. Last year, over 200 turtle hatchlings entered the South Muskoka River from this small location alone.

While Mr. Dyment has years’ worth of knowledge on these turtles, he’s found municipal interest in their protection lacklustre, at best.

“I’ve invited multiple Councillors and municipal staff to visit the turtle sites to share the years of knowledge I have on the turtles, but no one has ever showed up,” says Mr. Dyment. “So, I am happy to see the cavalry coming to help out.”